What is Open Innovation?

Recently, growing attention has been devoted to the concept of “Open Innovation”, both in academia as well as in practice. Chesbrough, who coined the term “Open Innovation” describes in his book “Open Innovation: The New Imperative for Creating and Profiting from Technology” (2003) how companies have shifted from so-called closed innovation processes towards a more open way of innovating.

However, several factors have led to the erosion of closed innovation (Chesbrough, 2003). First of all, the mobility and availability of highly educated people has increased over the years. As a result, large amounts of knowledge exist outside the research laboratories of large companies. In addition to that, when employees change jobs, they take their knowledge with them, resulting in knowledge flows between firms. Second, the availability of venture capital has increased significantly recently, which makes it possible for good and promising ideas and technologies to be further developed outside the firm, for instance in the form entrepreneurial firms. Besides, the possibilities to further develop ideas and technologies outside the firm, for instance in the form of spin-offs or through licensing agreements, are growing. Finally, other companies in the supply chain, for instance suppliers, play an increasingly important role in the innovation process.

As a result, companies have started to look for other ways to increase the efficiency and effectiveness of their innovation processes. For instance through active search for new technologies and ideas outside of the firm, but also through cooperation with suppliers and competitors, in order to create customer value. Another important aspect is the further development or out-licensing of ideas and technologies that do not fit the strategy of the company. Consider, for example, ASML, which is a Philips spin-off.

Open Innovation can thus be described as: 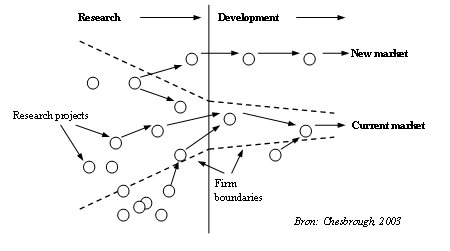 What does this mean?

This means that within the company a shift should take place in the way people look at the company and its environment. Involving other parties when developing new products and technologies can be of great added value. Think for instance about cooperation with other firms in your sector, suppliers, universities, and of course end-users.

The business model plays a crucial role in this is. After all, how and when external knowledge is required and used is to a large extent determined by the companies’ business model which describes how value can be created from innovations and which elements have to be sourced internally or externally.