The history of innovation theory is as rich as innovation itself. Greek philosophers like Plato and Aristotle already used the term καινοτομία coming from καινός (new) and τομ (radical craftsmanship): crafting in a radically new way. In modern theory, it was Schumpeter who popularized the term innovation in 1934 as part of his line of thinking about business cycles and creative destruction as the basis for (capitalistic) market economies. While he may have based his theory largely on 19th century and early 20th century economists, such as Tarde, Weber and Marx, his work was unique in the way that it combined all of these theories and that he described the important role of the ‘entrepreneur’ in innovation. Different scholars have later addressed the invention of the term ‘entrepreneur’ to Schumpeter.

While his work is widely accepted nowadays, it was not recognized as such at that time. Schumpeter was an extraordinary scholar, whose career did not follow the usual path. After attending an elite high school in Vienna, he first went into professorship positions and embraced an extravagant lifestyle involving both working and traveling across Europe and Egypt. After a relatively short period in the Austrian government, he went into banking and earned millions before losing everything again during the 1920s stock market fluctuations. In the late 20s he moved to the university of Bonn, but had less success during those years as he suffered great loss privately when his daughter, wife and mother died in the same year. After moving to the Harvard permanently he developed the works that made him influential only decades after his death. People think that the fact that gathered extensive experience both in politics, banking and science, made his work so unique – but also less likely to be accepted by his peers at the time.

Other highly influential works, for instance on the Diffusion of Innovation by Rogers and technological change by Freeman, did only refer to Schumpeter in very brief sidenotes. Their work is not very likely to be highly influenced by Schumpeters work, but much more by the economic philosophers that Schumpeter also based his work upon. However, it was the same Freeman who in 1974 popularized the work of Schumpeter. His extensive work on innovation, and his excellent tutorship to students in the University of Sussex, made Schumpeter as influential as it is nowadays.

It is therefore, that I have ‘overemphasized’ the importance of Schumpeters work in order to begin visualizing the history of innovation. If I wouldn’t have, it would have been simply impossible to draw a line. This idea has been the start of a long period of sketching, drawing, erasing – and of course: reading. The final result: this infographic titled “A Visual History of Innovation Theory”. 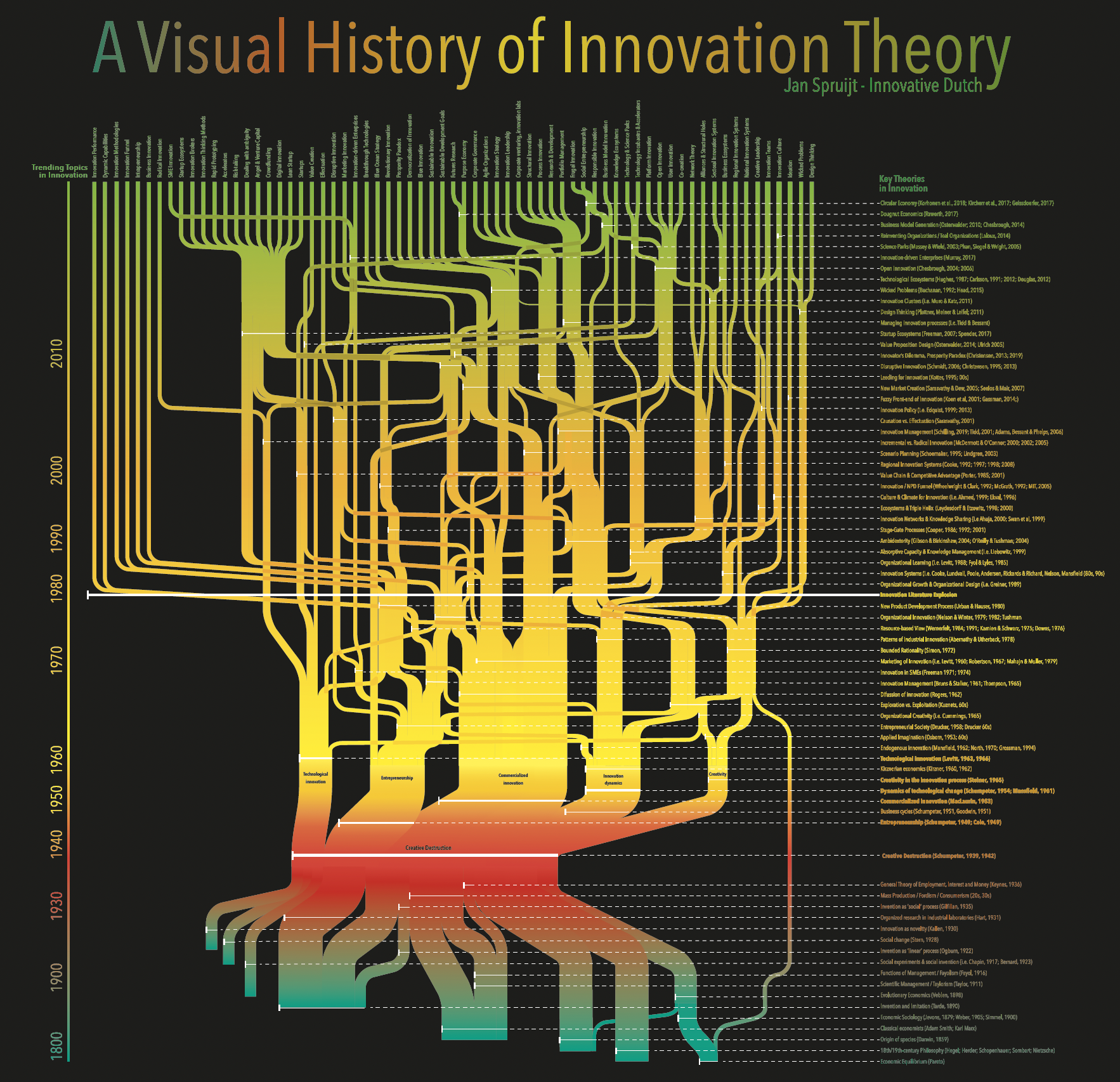 Since – what I call – the Innovation Explosion amongst scholars during the 80s and 90s, innovation theory has became much more diverse. While many topics, such as business model innovation, design thinking, responsible innovation and – of course – open innovation, are currently on every agenda, from startup founder to boardroom meetings – the rich, and often joint, origins of these theories are less understood. Understanding these origins will help professionals to understand the theory itself. These origins are sometimes very clear, but more often not. Take for instance the exceptional work of Sarasvathy on ‘effectuation’. Although you might not expect directly when looking only at the theory itself, she was highly influenced by her tutor Herbert Simon – who won a Nobel Prize on his work about bounded rationality. But not only effectuation is linked to bounded rationality, also ‘design thinking’ as we know it today is derived from the line of thinking that Simon put forward in his work.

This visualization makes an attempt to figure out the origins of around 60 topics that are currently trending in innovation science. It tries to reveal the key theories that have influenced the current line of thinking – most of it leading backwards to the five fundamental theories that can be linked to Schumpeters work:

This visualization will (hopefully) help you – innovation professionals and students – to understand the fundamentals of the models you currently use, the theories that you know and perhaps also the way that you are trained to think about innovation, entrepreneurship and the world you live in. I hope it drivers you to take a deep dive into earlier works and the stories and background of those who have had their key stamp on innovation literature.

While researching as much angles as possible, what I’ve tried to do, is link them to each other, by both using forward and backwards analysis of each of the works. A relation between two theories does not mean that the author of the most recent work is directly influenced and referring to the work it is linked to. It could also mean that the relations go a few steps back in time and that in hindsight these theories are very related. It could also mean that the authors knew each other, in some cases privately (such as Schumpeter who new Drucker, as he was the son of one of his friends), through education (for instance the way that Freeman tutored Soete, who in turn collaborated intensively with Tidd & Bessant), or through networks (from early 20th century private clubs of thinkers to 21st century global conferences (i.e. Academy of Management) and networks (i.e. ISPIM). I’ve tried to make the relationships as detailed as possible, but nevertheless had to decide to exclude quite a few of them because of the visibility of the visual and the way that it would draw your attention away from the main message. The result is definitely also based on extensive research done by scholars before me, such as the exceptional Benoît Godin – who has made it his life work to research the history of innovation in The Idea of Innovation (many of his articles are freely accessible) and many academics who have tried to understand the way that Schumpeter influenced modern-day literature on i.e. innovation management, entrepreneurship, open innovation and many other bibliometric analyses.

While the visual is already including quite a few theories, there are even more theories that could not be included. A few of the limitations of this infographic that you should realize when studying it are:

I’d be really grateful if you guys have any suggestions, tips or improvements to further increase the validity of this visual. Please drop them in the comments below.

One thought on “A Visual History of Innovation Theory” 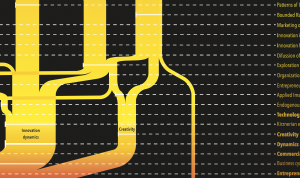