4 Paths to a Sophisticated Innovation Strategy

In december I reached out to both Alexander Osterwalder and John Bessant and asked them what is the most important organizational skill for engaging continuously with innovation. Their answers were almost the same:

Shorty after, I read an article by Ayse Birsel, on Inc.com1. She also talked to asked Alexander Osterwalder and asked him the question why ‘designers who are fluent at business strategy’ and ‘business people who are fluent at design’ are so different to each other. He could easily name 8 differences between the two of them, but the article concluded with the statement that organizations are in need of both explorers and exploiters – or evolutionaries and revolutionaires2. 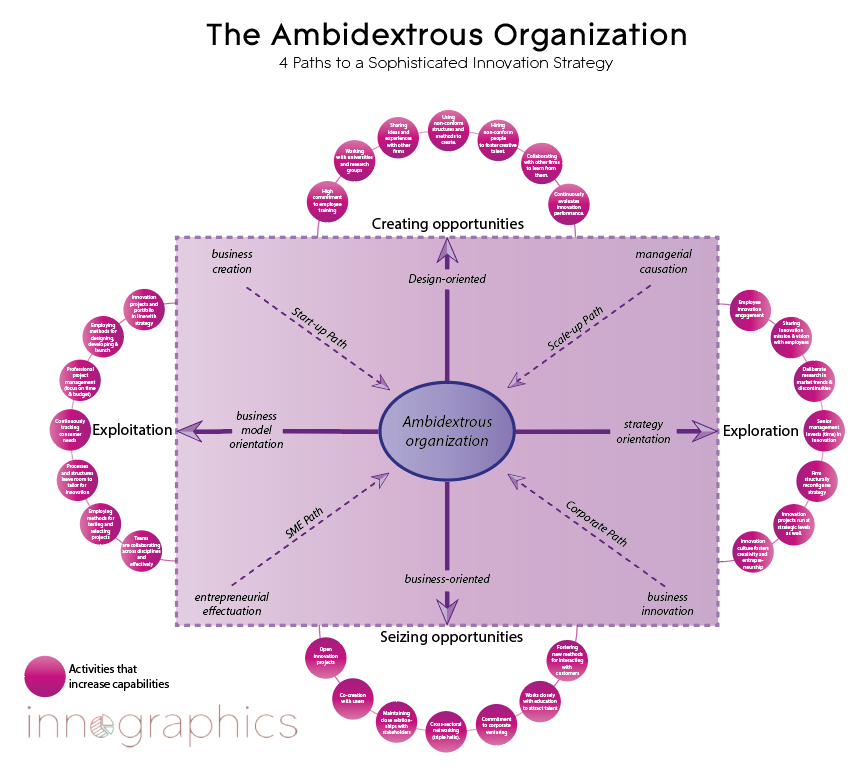 In management theory, this has long been referred to as organizational ambidexterity: > the ability of an organization to both explore and exploit—to compete in mature technologies and markets where efficiency, control, and incremental improvement are prized and to also compete in new technologies and markets where flexibility, autonomy, and experimentation are needed.3

I discussed this construct briefly in an article last September.4. The construct usually deals with exploration on the one hand, and exploitation on the other hand. But reading the comments of Osterwalder and Birsel, and some other material that appeared online in December, I wasn’t exactly sure if exploration could be compared with ‘designer’ and exploitation could be compared with ‘business people’. I started to draw upon that idea, talked to a few people and figured that the construct of ambidexterity could actually be described in more detail when taking into account all 4 of these:

This leads to the following two extremes on the horizontal axis. Following scientific evidence on ambidextrous organizations it could be stated that magic happens when business model generation meets strategy creation.

This part is more in line with the discussion I had with Alexander Osterwalder and John Bessant. Among researchers, the intersection of design and management (science) has long been a topic of discussion. There is a growing group of scientists, mostly in business (engineering) that believe that management science is in fact a design-oriented science and that the two are as such inextricably intertwined with each other. Especially in the field of Entrepreneurship, there are findings that this is true:

We conclude that the interaction between the two (creative rdesign and scientific validation) can drive the continual renewal of the entrepreneurship field and unlock the potential of an inclusive body of knowledge that is both rigorous and relevant. (Romme & Reymen, 2018)8

In order to elaborate on the magic that happens when design meets business we should therefore look at theory on entrepreneurship that deals with this magic. One of the most relevant theories on that is the ever-lasting battle between Schumpeter and Kirzner. The Schumpetarian approach argues that organizations try to create something new9, while Kirzner argues that it’s about seizing existing opportunities10. Research has shown that organizations deal with different strategies over time and that organizational design takes a more flexible approach in order to simultaneously deal with both effectuation and causation11 12., which can be seen in the following example:

This leads to the following two extremes on the vertical axis.

Capabilities for a sophisticated innovation strategy

John Bessant and Joe Tidd created a model for developing and testing innovation capabilities in their 2009 work Managing Innovation.13 In 2015, Ferreira et al tested the assumptions and different capabilities Tidd & Bessant proposed and draw conclusions on the most interesting measurable capabilities for a sophisticated innovation strategy.14. A few of the most important capabilities were:

Haanaes, Reeves & World argue that only 2% of the companies are part of the elite group of organization who understand that you have to excel at both efficiency and innovation. They find that the above-mentioned may be true: “Maintaining an outside-in perspective starts by continuously scanning the market, both demand and supply.”15

In the visual I’ve included 28 capabilities that drive innovation on each of the extremes of the innovation landscape. Balancing the focus between them brings you closer to the 2%.

Below, you’ll find an example of the Scale-up Path and the capabilities they could strive for.

One thought on “The Ambidextrous Organization” 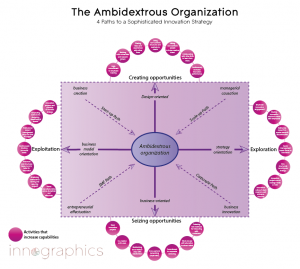