The rise of open innovation has been a long-standing trend in business. In the early 1990s, companies were starting to realize that they could improve their competitive edge by sharing their ideas and innovations with others. This led to the development of the concept of “open source” software, which allows for free exchange of information among developers. Open innovation is a term first coined by professor Henry Chesbrough in his 2003 book “Open Innovation: The New Imperative for Creating and Profiting from Technology”. It describes the process of organizations leveraging external ideas and resources to drive innovation and growth. This can be done through things like open R&D, corporate venturing, collaborative research, etc.

Henry Chesbrough’s work on open innovation has had a significant impact on the field over the past two decades, helping to shape a more open and collaborative approach to innovation. His work has shown that organisations can benefit from sharing ideas and knowledge with others, rather than keeping them secret. Open innovation can help organisations to be more agile and responsive to change, as well as reducing costs associated with research and development. Now recognised by companies of all sizes, in all industries – Henry Chesbrough’s work on open innovation is an important part of the 21st century way of doing business. Open innovation has been shown to be an effective way for companies to accelerate the pace of innovation and bring new products and services to market faster. Many leading companies like Google, Apple, 3M, etc. have all adopted open innovation practices with great success.

Over the past 20 years, there has been a significant increase in the number of scientific publications on open innovation. This growth is indicative of the evolving nature of open innovation, as it becomes more widely adopted by organizations across different industries. As open innovation continues to evolve, we can expect to see even more innovative applications and results achieved through its implementation. The benefits of open innovation are numerous and well-documented, making it an attractive option for organizations looking to improve their R&D efficiency and effectiveness. There are a variety of ways to implement open innovation, so organizations should carefully consider which approach is best suited for their needs and objectives.

Infographic: a visualization of 20 years of Open Innovation research

The methodology leading up to the data visuals are described below. 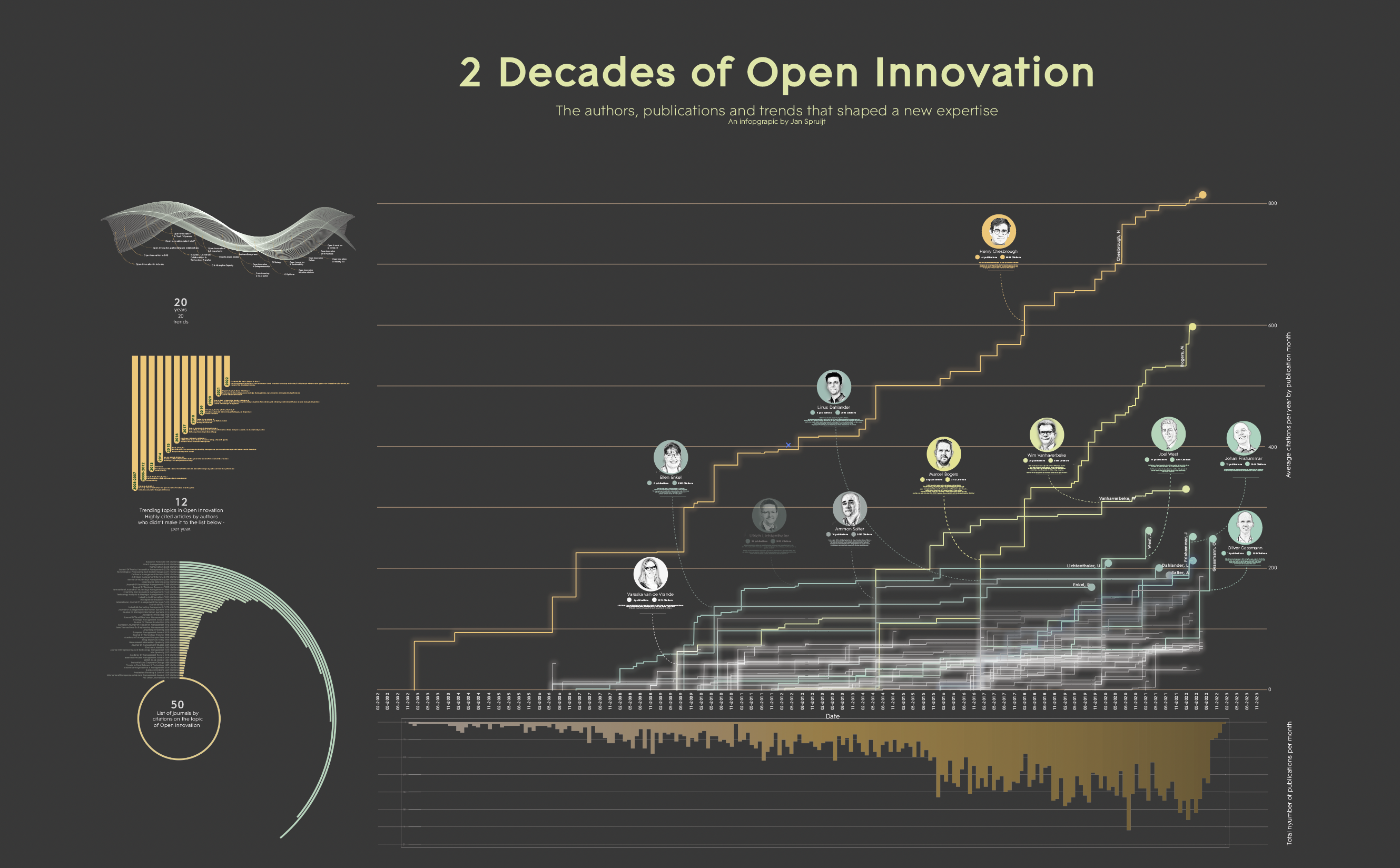 In order to create this overview of open innovation, we’ve searched through scientific publications on open innovation. For this purpose, in line with other publications in the field, we’ve searched through the Web of Science with the simple search term: TS=(“Open Innovation”). TS is a search operator that makes sure that only the title, abstract and keywords of an article are taken into consideration. This resulted in exactly 3886 publication published between 2003 and 2023 (early access papers might contain a publication date in the near future). However, Web of Science also sometimes includes so-called predatory journals – journals that do not meet the quality standards. We’ve ignored publications and authors that have primarily published in predatory journals. We’ve used this as our basis for creating the visualization:

We are aware of the fact that this infographic knows a few limitations:

The future of open innovation looks promising – as evidenced by the continued growth of open source software and other forms of collaborative technology (such as social networks). Furthermore, new technologies such as artificial intelligence (AI) may further enhance the benefits associated with open innovation platforms. 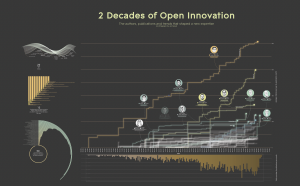