The history of innovation theory is as rich as innovation itself. Greek philosophers like Plato and Aristotle already used the term καινοτομία coming from καινός (new) and τομ (radical craftsmanship): crafting in a radically new way. In modern theory, it was Schumpeter who popularized the term innovation in 1934 as part of his line of thinking about business cycles and creative destruction as the basis for (capitalistic) market economies. While he may have based his theory largely on 19th century and early 20th century economists, such as Tarde, Weber and Marx, his work was unique in the way that it combined all of these theories and that he described the important role of the ‘entrepreneur’ in innovation. Different scholars have later addressed the invention of the term ‘entrepreneur’ to Schumpeter.

END_OF_DOCUMENT_TOKEN_TO_BE_REPLACED

Recently, there has been some debate about whether or not the theory about Disruptive Innovation should be followed upon by business leaders or not. In her article The Disrupting Machine Jill Lepore suggests that the theory is based upon flawed assumptions. Many articles have tried to support Lepore – such as John Parkinson – and many others, including Christensen and Irvin Wladawsky-Berger have tried to proof why it’s a trustable theory.

But the discussion is about the wrong topic: it shouldn’t be about whether or not the theory is suitable, it should be about whether or not theories could ever be undiscussible. They can’t. Theories are build upon models; aggregated from results, averages of true situations and therefore there will always be examples of situations in which they don’t seem to fit. That is the nature of theories. Reality is far more complex than theories could ever describe and business owners and leaders should always keep that in mind before rigurously implementing one single strategy based upon a certain theory.

We should embrace scholars who use true data to gather results, analyse them and draw significant conclusions. But we should even more embrace scholars who have the courage to use their intuition and vision to fill in the gaps – and of course make those steps clear to the reader – and create possible new ways of thinking about ongoing matters. It is them who have changed management and business in general.

Please read the article below for another way of looking at disruptive innovation – and sustainable innovation. 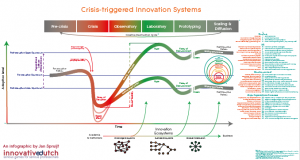