Many of our students work on innovation projects for SME. When asked to organize an ‘open innovation session’, students enthousiastically start to read details about open innovation, open sessions and different ways of creating an open innovation-mindset within SME. We usually point them to the excellent work of Lee et al (2010), an article that points out that SME usually prefer to be open in the exploitative stage of an innovation process (rather then the explorative stage of innovation) and that they prefer sharing risks with strong ties such as competitors, clients and suppliers.

Surprisingly, the SME owners act positive when the students introduce them to the idea of open innovation in the explorative stage, for instance by offering to organize a shared brainstorm session for them, but they close down when it actually comes to planning it. Although appreciating the idea itself, they don’t see the direct benefit for it themselves. It seems they fell prone to the prisoner’s dilemma.

The Prisoner’s Dilemma is a so-called non-zero-sum game, which in economic terms represents a situation in which the collaborative total gain could be larger the individual gains. Simply said: 1+1 could be more than 2. The Prisoner’s Dilemma however sketches the situation in which the individual is aware of the fact that the total gain may be larger, but still prefers their personal gain over the group gain for any number of reason. They don’t collaborate, because they think personal benefit is more important than mutual benefit. Click here for an explanation of the Prisoner’s Dilemma.

In business, this dilemma is very common: not collaborating gives a higher reward on the short-term. The example of our students, and many examples alike, are caused by small fallacies in our way of thinking. Fallacies that were necessary in prehistoric times and are so deeply rooted in our behaviour that we often don’t even recognize when we behave like that. But quite often, these fallacies are not very rational and certainly not effective for business. The dilemma is summarized in the quotation: “If you want to go fast, go alone; if you want to go further, go together.”

In 2012 Rolf Dobelli published his book ‘The Art of Thinking Clearly‘, which contains 98 missers in our brain when it comes to business and marketing (and innovation if you like). In the work, all of these 98 missers are linked to each other, which brought me to the idea of creating a network infographic with all 98 missers showing how they are related to each other. Below you’ll find the infographic and an explanation of a few fallacies that are most common in innovation processes. 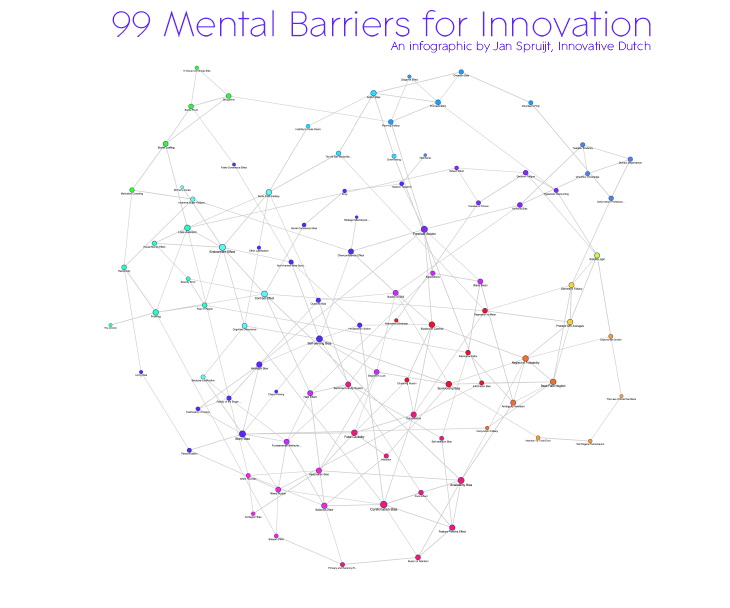 A well-known example, the Not-Invented-Here-Syndrome is a stance adopted by social, corporate, or institutional cultures that avoid using or buying already existing products, research, standards, or knowledge because of their external origins and costs, such as royalties. It prevents companies from collaborating effectively.

The Sunk Cost Fallacy refers to the justification of increased investment of money, time, lives, etc. in a decision, based on the cumulative prior investment (“sunk costs”); despite new evidence suggesting that the cost, beginning immediately, of continuing the decision outweighs the expected benefit. In open innovation projects it usually comes down to the fact that there is no clear stage-gate-model in place and a ‘go’ is given rather than a ‘no-go’ for the fact that all parties have already invested time and money in trusting each other and building the prototype.

Our minds are highly associative. We even associate things that are not to be associated (also see: clustering illusion, for instance when we see certain shapes in clouds). For this reason we also use prior experiences and knowledge to present situation, causing mistakes in our thinking. Not all past experiences are representative for current situations, such as collaborations or failures on product development.

Neomania is the irrational behaviour associated with early adaptors. Okay, we need them to test our products, but please don’t be one yourself. In innovation, neomania refers to the fact that we irrationally want to create new things, new partnerships, new trials, new tools, even though we haven’t yet brought to market the last invention. Be aware of neomaniacs in your partnership.

This terminology refers to the fact that we can only look at problems from our own perspective. Mark Twain once said: “If your only tool is a hammer, all your problems will be nails.”. Especially within Open Innovation contexts it is necessary to accept and overcome Déformation Professionelle, by striving for a diverse, wide network.

One thought on “99 Mental Barriers for Innovation Infographic” 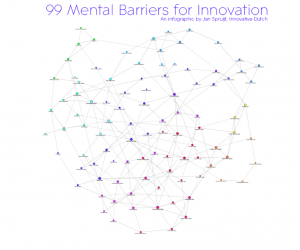