The Innovation Ecosystem is one of the most under-researched topics. One the one hand because policy researchers usually tend to focus more on polls, elections and international collaboration and business researchers usually tend to focus more on organizations and interorganizational collaborations. However, publisher Edward Elgar has repeatedly published interesting works on innovation policy, innovation systems and the like. An ecosystem of innovation could be described as, quoting Wikipedia, the flow of technology and information among people, enterprises and institutions [which] is key to an innovative process. It contains the interaction between actors who are needed in order to turn an idea into a process, product or service on the market. The Innovation Ecosystem is extremely important to the economy and welfare of a country or region. It is one of the main drivers of GDP. Over the past decades more research has been done on the dynamics behind these ecosystems and its subsystems. Below you’ll find a schematic overview of the innovation ecosystem. It will take you to the download side of Innovative Dutch, where you can download it in full resolution. 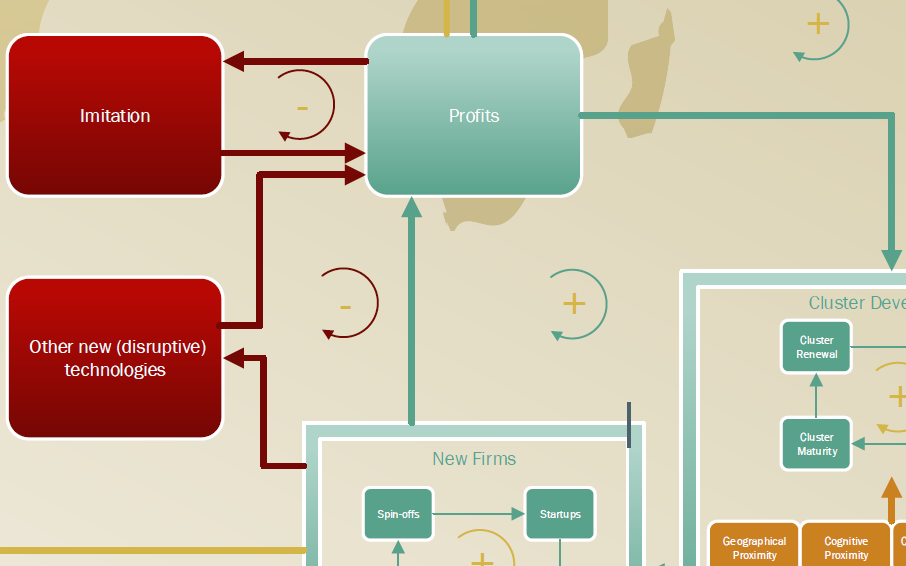 System Dynamics within the Ecosystem

The Innovation Ecosystem could be defined as a dynamical system. Dynamical systems are a theory first mentioned by Jay Forrester in the 50s and applied to a wide range of disciplines such as demography, ecology, evolution, economy and sociology. It suggests that systems contain complex feedback loops, causal links, flows, stocks, delays among the agents. Because these agents influence each other with complex logic, mostly non-linear, it is very hard to predict how the system will behave. Usually the basic feedback loops consist of positive loops, that will keep enhancing itself without limitation. However, the system also holds several negative loops, that will discontinue the positive processes. Systems usually continue switching between positive flows and negative flows, making fluctuations very common. For instance, in climate, is it common to have fluctuations per the hour, per the day, per the season, per the year and over long era’s. The same holds for the economy or for rabbit populations. Complex dynamical systems can be mathematically programmed. The following example shows how a system with only two actors can even achieve chaos within a few cycles when there are small anomalies in its initial circumstances. This is called the chaos theory: imagine the long-term effect a small change can have. For instance, the effect of a local forest fire on the weather world-wide. Or losing a coin on the local economy. Innovation ecosystems work the same. There are many agents, that are influences by a wide range of actors. Imagine the effect of low-level corruption on a national ecosystem or the effect of a successful start-up on the world-wide ecosystem.

There are many different subsystems of innovation, for instance:

The above-mentioned (sub)systems of innovation are in fact ‘positive loops’; meaning that they will positively influence each other in an endless loop. As explained earlier, dynamic, chaotic systems, are almost always also containing negative loops, that break the positive flow. These negative loops can turn around the whole mechanism and cause crises, for instance the economic crisis. In the innovation system there are four main negative loops that create discontinuity:

The innovation policy regarding RIS and NIS involves many different aspects. One way or another, the institutional environment tries to (positively) influence the main industrial innovation system. A few of the soft factor that policy usually to focus on are:

Over the last decade we’ve heard a lot about the triple helix. More recently also the quadruple and quintuple helix have been introduced. Moreover, also Open Innovation and Co-creation have been growing over the years. What they have in common is that these theories try to integrate the different actors in the traditional dynamical view of ecosystems with each other. In that case, it won’t be a ‘flow’ and it will therefore reduce the time delays within the flow. Simply said: deep integration between goverments and industry could result in quicker innovation. As does deep integration between education and industry; or different industries with each other, et cetera. The triple helix is a modern, 3D, view on system dynamics in the innovation ecosystem.

Games are a very common way to let actors in the network know how complex dynamics works. These games let you play with a few of the ‘agents’ in the ecosystem to experiment with the effects to better understand long-term behavior of ecosystems. Innovative Dutch creates these kinds of strategic simulation games for governments, companies and higher education; they created this infographic for their newest game; please take a look at their website. 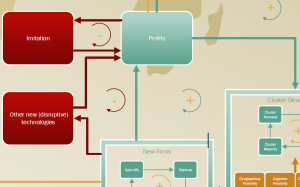